The Winner of the Gane Travel Scholarship for 2011 was Sula Bailie, a student in IMO Three dimensional design. Sula’s project was entitled Stories within Pattern, and took her to India in spring 2012.

Sula presented her experiences to the Trustees and an audience of students and staff on Thursday, April 26th 2012 at Bath Spa University campus, in the form of a fifteen minute film which she shot and edited herself. It gave a vivid account of the richness of her experience, which centred on travels from New Delhi to the North West of India, including the historic cities of Bhuj and Jaipur.

Sula was fascinated by the range of surface decorative techniques used in India and visited a number of practitioners from block printers to painters in castor oil pigments, as well as observing traditional arts such as hearth-decorating for festivals. She showed footage of herself being taught to cut and use a textile print block as well. Her visit to India generated a wealth of ideas and visual experiences and will feed importantly into her final year’s work.

Side: Sula giving her presentation

Bottom: Sula’s print-block, with fabric she printed from the block 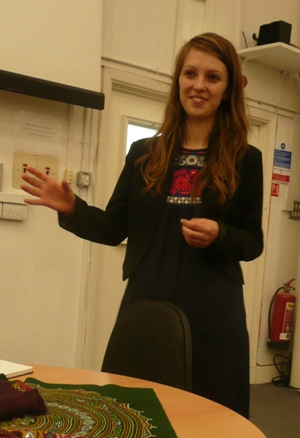