Phoebe Lloyd was announced as this year’s DIA Gane Trust Award winner on 14th June at the City of Bath College, to the obvious delight of her year group and teachers.

Her work showed “outstanding flair” in the words of the assessors, and her drawing was of particularly high quality.

Phoebe received her cheque after the Second Year Fashion Show from Peter Metcalfe, Gane Trustee and DIA member, who spoke enthusiastically about the quality of the Second Year’s show, presented in a new informal way in the Roper building of the College, before an audience of friends, family and past students. 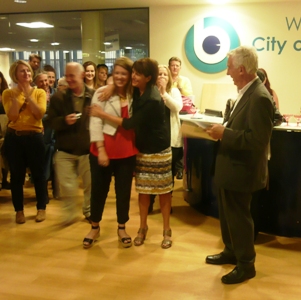